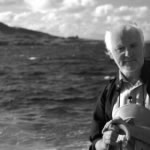 Was writer in residence at Sabhal Mor Ostaig, the Gaelic college in Skye. A native of South Uist, he is a widely-published poet and author as well as an award-winning journalist. He writes a weekly Gaelic column for the Free Press.

Roger Hutchinson is an award-winning, best-selling author and journalist, based on the island of Raasay.

Roger has received a number of awards for his journalism, including British Weekly Sportswriter of the Year in 1996. His books include Camanachd: The Story of Shinty, Polly: The True Story Behind Whisky Galore, The Toon: A Complete History of Newcastle United, 66: The Inside Story of England’s World Cup Triumph and Aleister Crowley: the Beast Demystified.

Roger’s best-selling book, Calum’s Road, which was described by Magnus Linklater in Scotland on Sunday as ‘destined to become a minor classic’ and has been optioned to be adapted into a feature film.

Chris Mitchell was born in Bridlington in 1949. He graduated in zoology and psychology from the University of Hull where he was awarded an MSc for his research on insect behaviour. He moved to the Isle of Skye in 1978 where he continues to lives with his wife, Janet

Chris is a member of the British Lichen Society